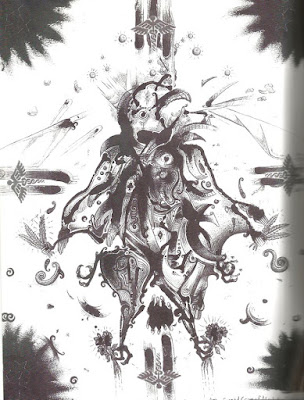 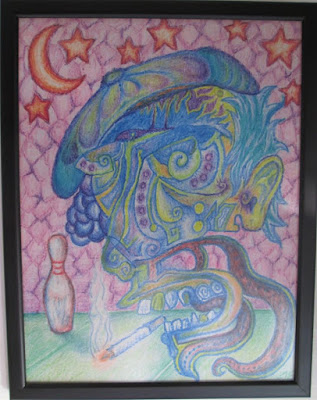 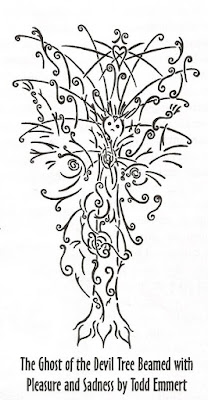 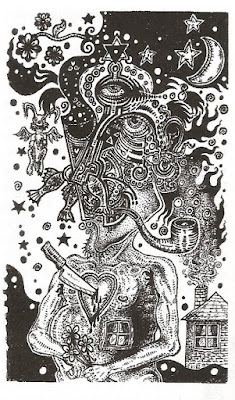 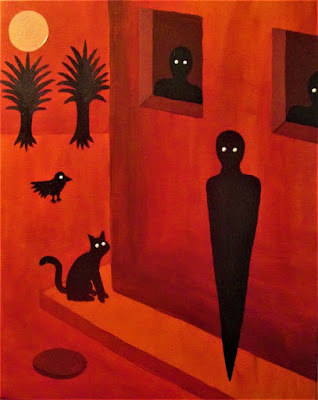 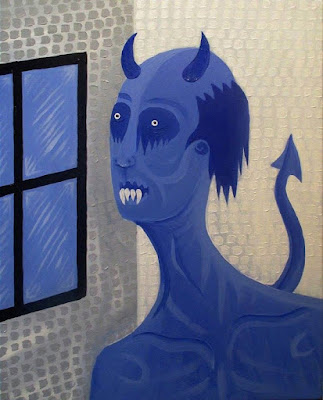 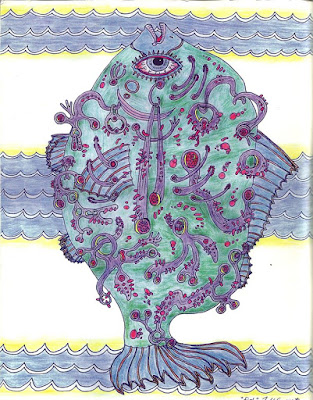 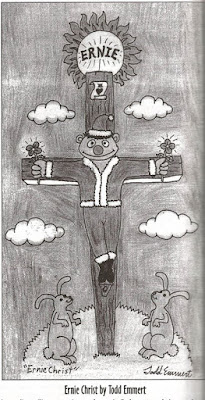 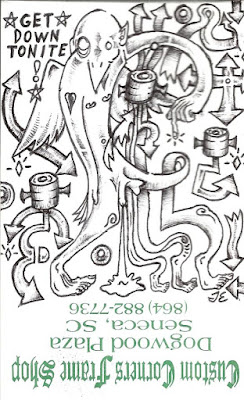 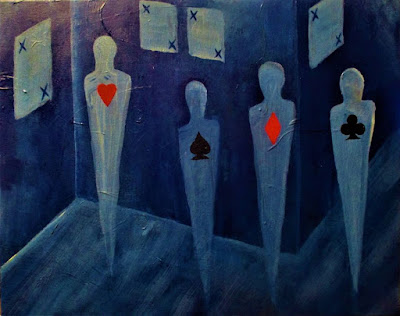 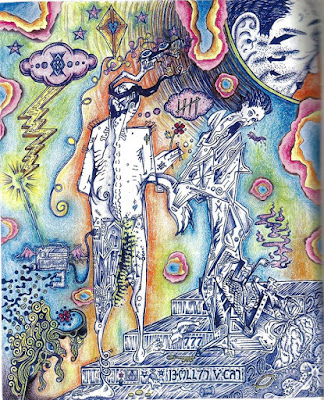 1. I knew about your drawings through my favorite magazine ever, Bananafish. Correct me if I’m wrong, but I think you began to collaborate with them in the 13th issue, right? How did you get involved with the mag? I’ve seen Tedium House distributes your music so I suppose you do, but are you still in contact with those people?

I think it was issue #13 that I first had some drawings in. I lose track of the specifics sometimes. I was always a huge fan of Bananafish Magazine. So I just started sending them mail, like a whole lot of mail. I think they were overwhelmed, and my apologies to them if I ever got on their nerves. I am in contact with my friend Earl from the magazine, but like, I have no idea who these Bananafish people are at all. I have never met anyone in person. Correction, I am actually Facebook friends with one of the editors. But for the most part everyone was using fake names I think. I just don't even know who all I communicated with back then. I wrote and they wrote back.

2. There are some of your drawings from that era that got stuck in my mind, like the “Ernie Christ” one. There’s a strong outsider psychedelic vibe in your art, can you tell me about your influences (not only artistic)? Do (did) you take drugs?

Early on I was influenced by Raymond Pettibon and Pushead, but also Picasso and Roy Lichtenstein, or at least I was influenced by some aspect of all these artists. I will just say I see no reason for some drugs to be illegal and leave it at that. I am influenced also by comic books, which I used to draw images out of as a child. 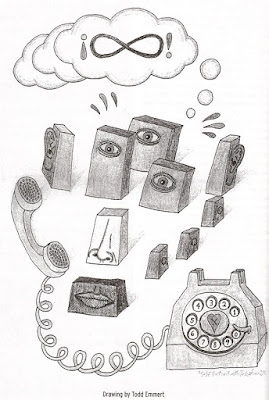 3. There’s no way to see your drawings or paintings except facebook, I think...Do you collaborate with any publications at the moment? It would be great to see a book of your drawings!

No, I don't currently work with any publications, but I did just paint the cover for Lisa Carver's new book. Someone would have to ask me to collaborate these days as I don't necessarily search it out for myself anymore, or really ever did. I worked with Bananafish because they seemed like a whole crazy world to me because I grew up in a small town in North Carolina and they wrote me back. I would love to make a book of my art, but again, I am lazy about that stuff these days. I just focus on acrylic painting now, also, I rarely draw anymore.

4. I’ve not been very familiar with your musical side, but you sent me your last cd and I loved it. I’ve been digging through your bandcamp and I’d like to know about your musical inspirations. I wouldn’t know how to describe your music...folk-noise-psych-pop? I know you’ve recently released something in the great label Chocolate Monk. Are you still involved in the DIY-noise scene?

I was really disappointed when I got my first electric guitar as a teen and didn't immediately sound like "Ride The Lightning", ha. But eventually I heard the Velvet Underground as a senior in high school and got interested in playing music again. So stuff like VU, Spacemen 3, The Stooges, New Zealand punk. I started recording songs in 1991 as Shortman. I am not really involved in any scene anymore, like I don't play noise shows or anything. And actually I retired from playing live entirely because my nerves are shot. I record everything at home by myself now, but I may start a collaboration with a friend sometime soon too. I played some Inspector 22 songs with a band several years ago and tried to record some with them, but it didn't work out. 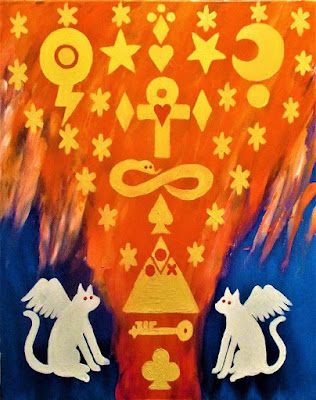 5. I guess Therapy Tapes is your own label. Have you released music by other people?

Therapy tapes is my label, yes. But I really only use it to release my own material these days. I did release a tape by a Christian noise artist named Clang Quartet, a tape by one of my best friends called Soft Focus Unicorn, and another tape and lathe 7" by a metal band called Crucified Mortals. But that's it I think.

6. I’d like to know about your creative and recording process. I guess you record music by yourself? Have you ever been in bands or you’ve always played alone as Inspector 22 and Todd W. Emmert?

Maybe I sort of answered some of this question in # 4., but yeah I have always played in bands since high school, maybe started my last year in high school. I haven't played in a band for 6 or 7 years now. But recently, I have become friends with someone who I may start a band with. Or at least we will record some maybe. 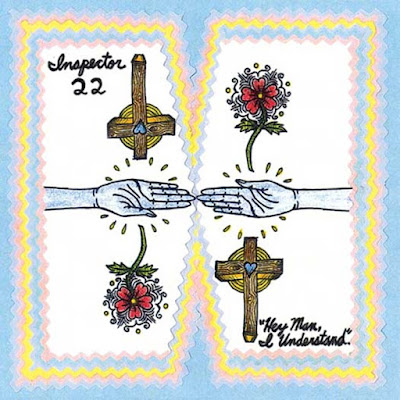 7. In the Chocolate Monk web page there’s a bio of you that says “In 1995 he was diagnosed with schizophrenia and hospitalized, at which point he lost his ability to create art.” How did you get back to artistic creation?

When I had my first psychotic break I was institutionalized and lost my ability to make art, it was gone from me for a while, but I used learning to make art again as a way to put my brain back together. Because my brain was shattered. I am better now than I was back then, in 1995. The doctors said I did as much recovery in two years that some people can't do in ten or ever. I didn't like being insane, so my drive to recover was strong in me.

8. Thanks a lot, Todd. Anything else you want to say, this is the place.

I wish you and your readers well! Cheers and Hails from North Carolina! 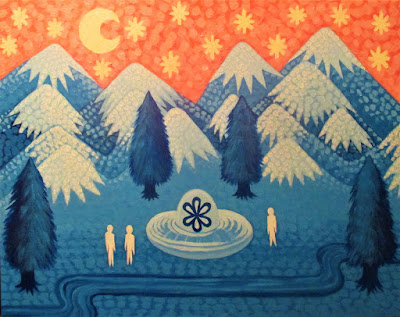 
Write to afeitealperro@gmail.com with your order and you'll receive a mail with shipping costs and ways of paying (paypal, bank transfer, postal check, old school way).